This post is following on from 30 Day Writing Challenge Review.

Many things helped me to make it through my way of publishing 30 times in 30 days, and today I’ll continue to share a few more.

Connecting to something bigger

At times of difficulty when I encountered a resistance to hit publish I returned to my why. It was a personal challenge, but personal only in so far as that I want to improve my ability to write and put out content so that ultimately I am more able to spread knowledge and information about psychedelics and to share ideas that I believe can be useful to other people. So when I had doubts I returned to the thought of ‘this is about much more than you’. This helped me to get over myself and think about the people my writing could reach and help. My feelings about how I might come across or how nice my writing is to read took a back seat to the primary aim of getting that information and those ideas out there into the world. This made it a whole lot easier to not get overly concerned with editing.

Knowing that it’s about more than myself was very helpful as those difficult feelings that I encountered were in the end just my personal difficulties. If I want to actually play my part in something bigger and contribute to the world in a meaningful way then I’m gonna have to get over myself.

Before the month I made a small reminder card with an image of the world and a heart that I now keep over my desk. This was to connect to the bigger picture of love and all those lives of the people around the world to help drive me on in times of difficulty.

I read Steven Pressfield’s Do The Work before and during the month on a timely recommendation from a friend. I think I’ve blown Pressfield’s trumpet enough on this blog by now for you to get it that his work speaks to me. One thing that stuck out from this work was that doing research can become a form of Resistance and procrastination. So for this month I actually did zero research for any of the articles. I referenced other materials and websites, but only ones that I was already aware of or had in mind that I could use. Aside from being hugely practical in terms of saving time, this was nice in that it was a good chance to test myself and my knowledge of psychedelics and it felt really good to keep churning stuff out without looking at what others had to say on the topic. It has been a great confidence boost for me and I feel way more ready to embark on creative challenges without spending so much time doing prep and just coming up with things on the spot. This is something I’d like to explore more in the future with workshops and talks and have more confidence in myself to do this than before.

I had a few rituals and routines which helped me throughout the month. Here are a few:

I am a fan of a strong morning routine. In July I would wake up around 6, drink a glass of hot lemon water and stretch, take a cold shower, meditate, walk once around the block and then eat breakfast before settling down to begin writing. Having such a consistent routine with an early start was definitely helpful.

The 6AM start did go out the window after my accident as I had difficulty sleeping due to the pain in my arm, but I did get back to early rising once I was able to sleep well.

Music was a huge help on days when I felt tired or low on inspiration. On most mornings during my short morning walk I would listen to some slamming track which would get me fired up and generally ready to kick some ass. My go to anthem for the month was The Bronx’s cover of Black Night Crash, a punk track which opens up with a ‘yeah!’ that got me going on even my most sluggish of mornings. I would often bounce around the block and always returned home ready to face a new challenge.

Once at my desk, immediately before beginning the first draft, I would read a short passage aloud:

This was inspired by Stephen Pressfield who makes a prayer to the Muse every morning before he begins writing. I liked the idea of using the same one but it just didn’t quite feel right for me. I found the above one whilst searching for prayers/odes to read before writing. This one was simple and straightforward and felt right, reminding myself that whatever I put down would be OK. Having this in the forefront of my mind before writing helped to settle me and then to blast through doubting resistance and keep moving forward with my first draft. 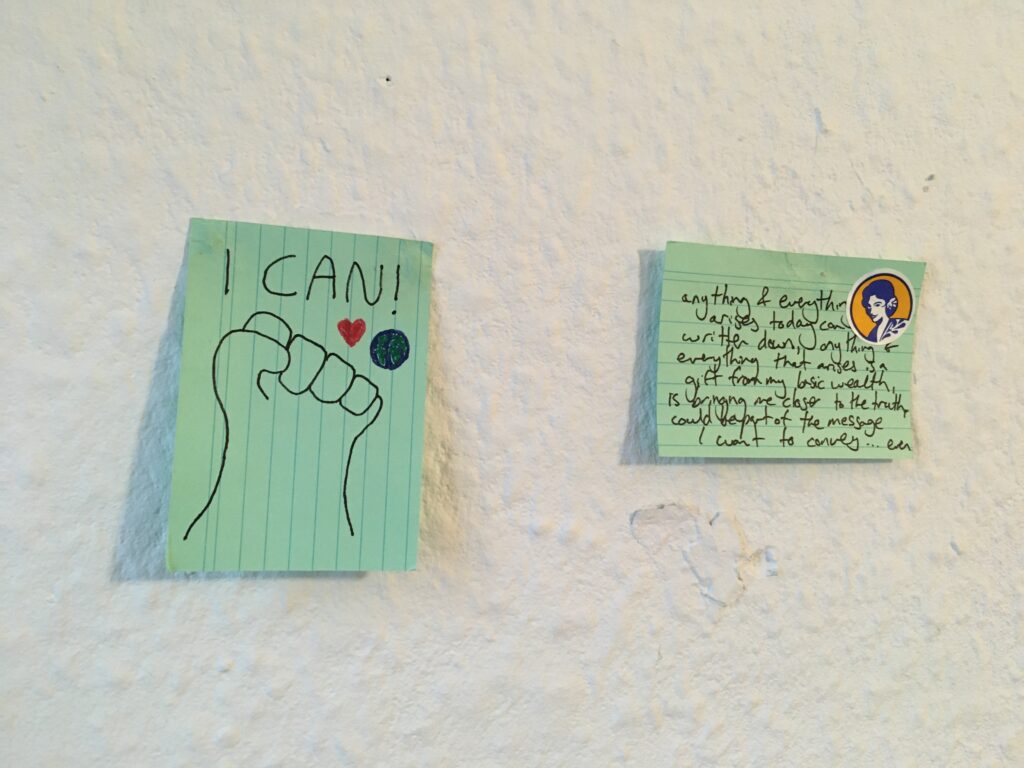 The idea for this challenge came in the latter part of a magic truffle journey and both excited and scared me. It seemed like a pretty big ask but at the same time the belief came to my mind, and it came with two words: ‘I can’.

This served as a mantra for my month and I repeated it many times in the week before starting as a way to psych myself up. I even changed the password on my computer to ‘I can!’ before the month so that every time I logged in I would again put it out in to the world and internalize this belief. I believe there is a great power to this and developing a mantra for a challenge is something that I will probably do again in the future.

So those are a few things which supported and helped me through the process, to finish here are a couple of final thoughts from the challenge.

Before going into the month I brainstormed a few article ideas and kept them in a list for my reference. Initially it was useful to have so I felt reassured that I wouldn’t draw a blank but as the month went on what happened was a surprise. Rather than the list getting shorter as I wrote different pieces, what I found was that the opposite actually happened, and the list of ideas for articles kept growing. As I wrote more articles, more ideas for other articles that I wanted to write just kept popping up. This was a great feeling as I find that moment when a new idea pops up in the mind to be quite satisfying. In a creative sense it feels great to have such an abundance of ideas out there. However, deciding to act on them or let them go is another step and definitely something for to me consider as I make decisions about how I will spend my time and what projects I want to devote my time and attention to.

This was the first 30 day challenge I used for a creative project and I think that is what made it so rewarding. It forced me to engage my mind in a particular way every day that is different than other challenges I’ve done and I noticed my mind working in a new and novel way that I haven’t since I learned Spanish. That psychedelic (reality broadening) aspect was hugely interesting and definitely will push me to do more of these types of challenges in the future.

Also, just being that creative felt great in and of itself. I was away for work the two weeks immediately following the challenge and didn’t have an opportunity to blog. (I wrote How to Start a Meditation Circle on a double day during the 30 day challenge so I’d have something to publish whilst away on work). I have actually missed getting up and writing and publishing every day. I don’t really know how to describe the feeling other than totally agreeing with Seth Godin’s comment that ‘blogging is good for the soul’. Although I feel rusty coming back to it after a couple weeks out it feels good to write again. There is a new version of Maps of the Mind coming later this year and I will then settle in to a schedule of one to two articles every week. I noticed that I had more regular readers for the month of July and that also felt great to have new content for people coming back.

One of the most remarkable things I experienced was the sense of purpose I felt throughout the month. The daily challenge gave me a real raison d’être each day and I woke up each morning excited for the day and to see what it had in store.

So there’s my review for my 30 day writing challenge.  Ultimately it was an incredible, magical, and especially empowering month. It has just further developed my love for the 30 day challenge and I am excited to throw myself in to many more. Taking a break for the month of August, I am already looking forward to embarking on a new one for September….