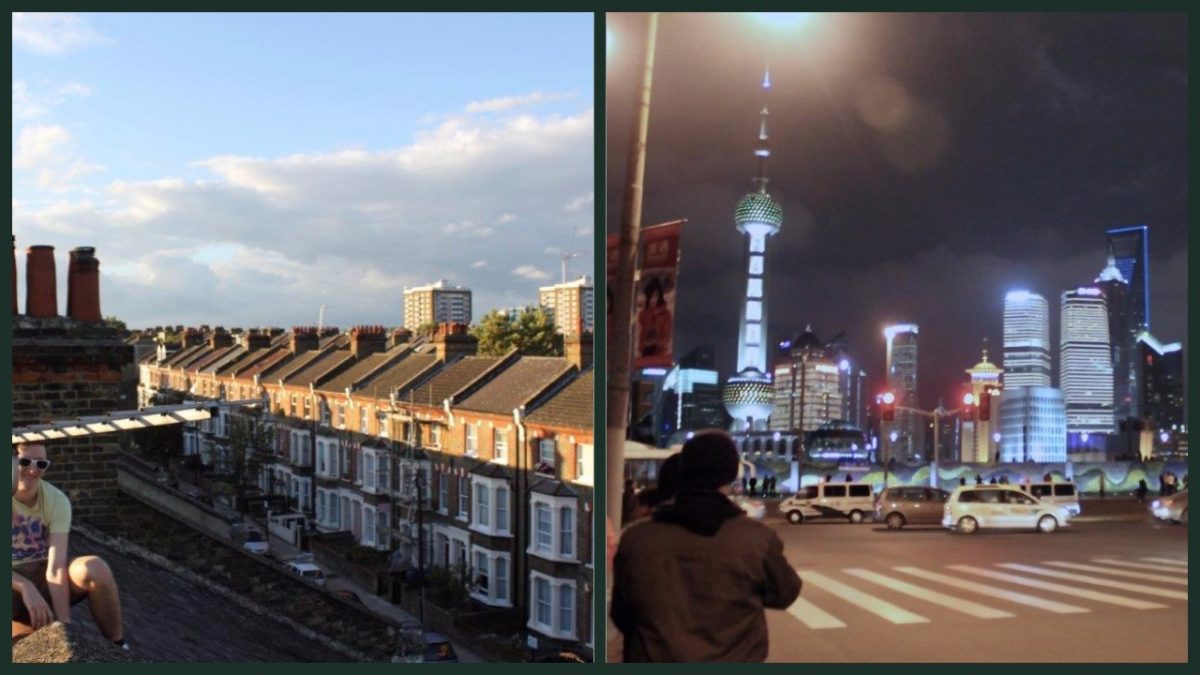 When I left the UK in 2012 to go and live and work as an expat in Shanghai I obviously expected to learn a bit about China and its culture, but what I didn’t foresee from the experience of living away was how I would learn about the country and culture I grew up in; England.

A buddy in London – another in Shanghai

I lived over a year in Shanghai, went onto South Korea, and after three years of living away I returned to my hometown. The day I returned I took the family dog out for a walk, a walk I’d taken a thousand times before, but there was an obvious difference this time – it was fascinating. I saw my neighbourhood and its streets and people with new eyes. What used to be a typically mundane walk to the park had become an opportunity for insight into the lives of English people. I felt like a tourist. The variety of nationalities astounded me after the homogeneous populations of China and Korea, and I marvelled at the narrowly paved streets lined with houses and the traditional public house on the corner – how English! Sound boring? Well, it was for me too, that’s why I left! But on returning home everything was fresh and inspiring and I realised how much better I actually knew my country than when I had left a few years earlier.

“We shall not cease from exploration, and the end of all our exploring will be to arrive where we started, and know the place for the first time.”
– T.S. Eliot 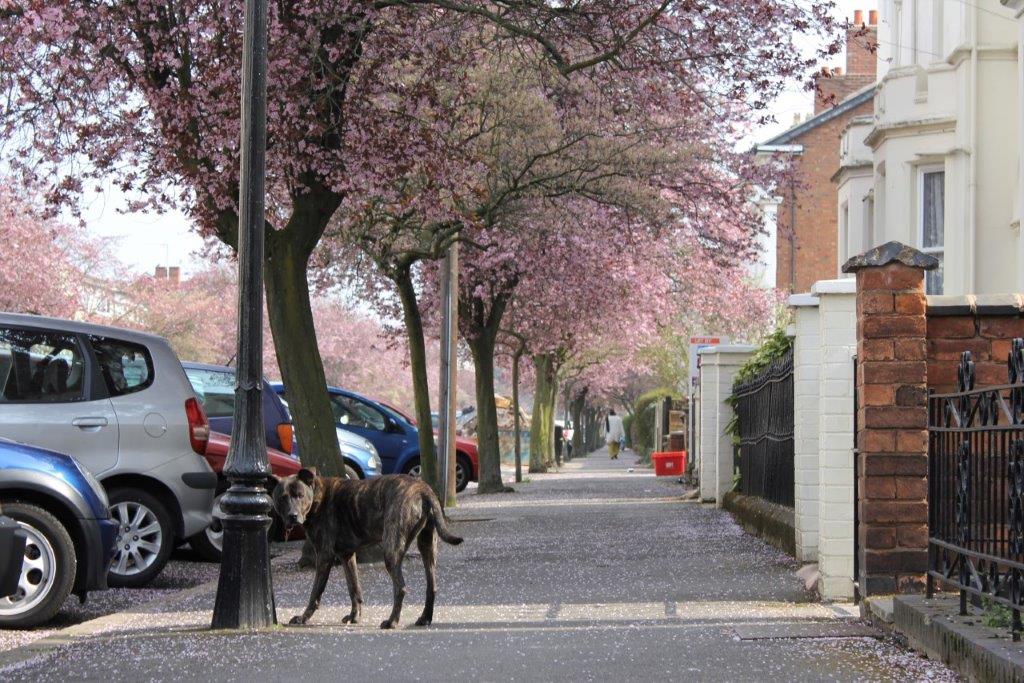 Walking the dog – different this time

“One thing about which fish know exactly nothing is water, since they have no anti-environment which would enable them to perceive the element they live in.”
– Marshall McLuhan

Arriving in China I was struck by the obvious differences from English society; language, mainstream culture, education, architecture, social norms, food, transport – and naturally compared everything to how it was back home. I had a new reference point for all of the things that’d made up and influenced my life in England but which I’d never had any real perspective on because I’d never lived anywhere else. I discussed the differences with other expats and came to a new appreciation of different aspects of my home country whilst discovering and exploring the wonders of my new life and home in the East.

Living with the internet restrictions of Chinese society (no youtube, facebook etc.) gave me a gauge on the cyber liberty of the UK, and living under their dictatorial regime – where speaking out as a dissident and protesting are dangerous acts to be involved in – gave me a benchmark with which to compare the freedom of expression my friends and family could enjoy back home. Leaving my country had enabled me to see it in a new way.

New perspectives can totally reshape what has become mundane, boring or even invisible. After learning how to read and write Hangul – the entirely phonetic, syllabic and incredibly easy to learn alphabet of Korea (seriously, you can learn it in a day) – I realised how poorly designed English is as a written language. Indeed, Hangul was designed to be easy – it was created by King Sejong in 1443 in an effort to increase literacy rates and to lessen the power and wealth gap. 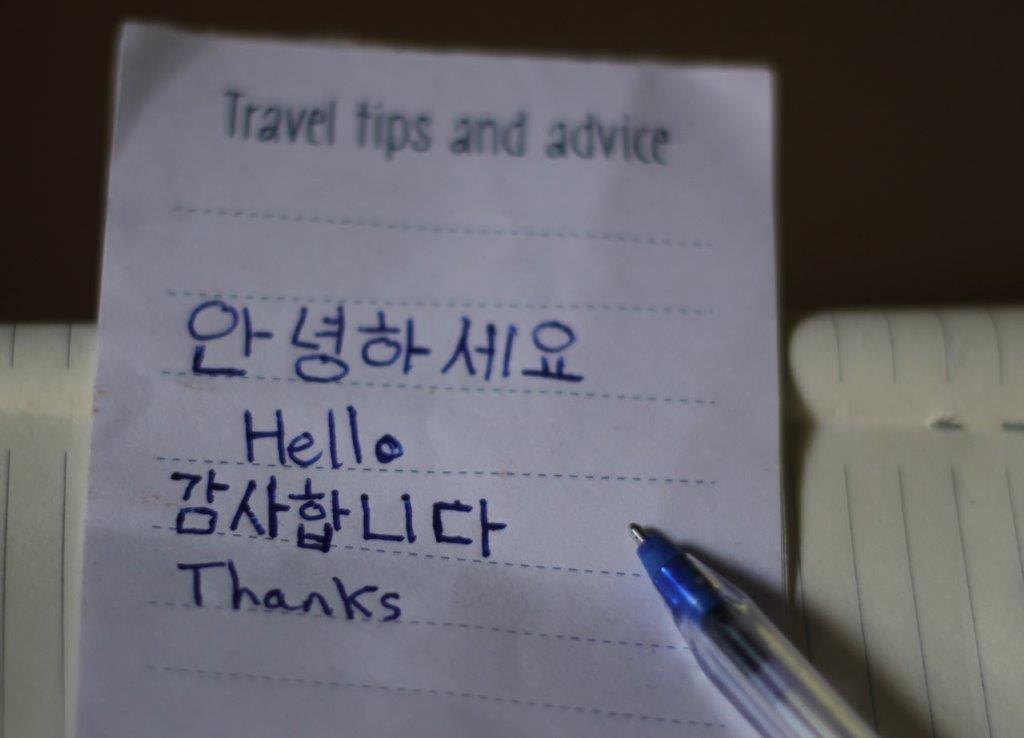 By comparison, English is a clunky mongrel language – spelling, pronunciation and usage have evolved and mutated in as many and as varied ways as the places our words came from. Whilst I could easily have learnt this information without ever leaving England, the necessity of learning other languages forced these considerations into my consciousness and gave me an experiential appreciation of what would’ve been purely theoretical knowledge.

There Is No End To Discovery

Language is just one example and there is seemingly no end to the new insights one can gain by delving into another culture. After three years in the far East I felt like I’d barely scratched the surface, yet had still found countless new perspectives on all manner of things that I’d never really considered back home; from greetings; handshakes vs. bows, to social outlooks; individualism vs. collectivism.

Renewed Interest Through Others’ Interest 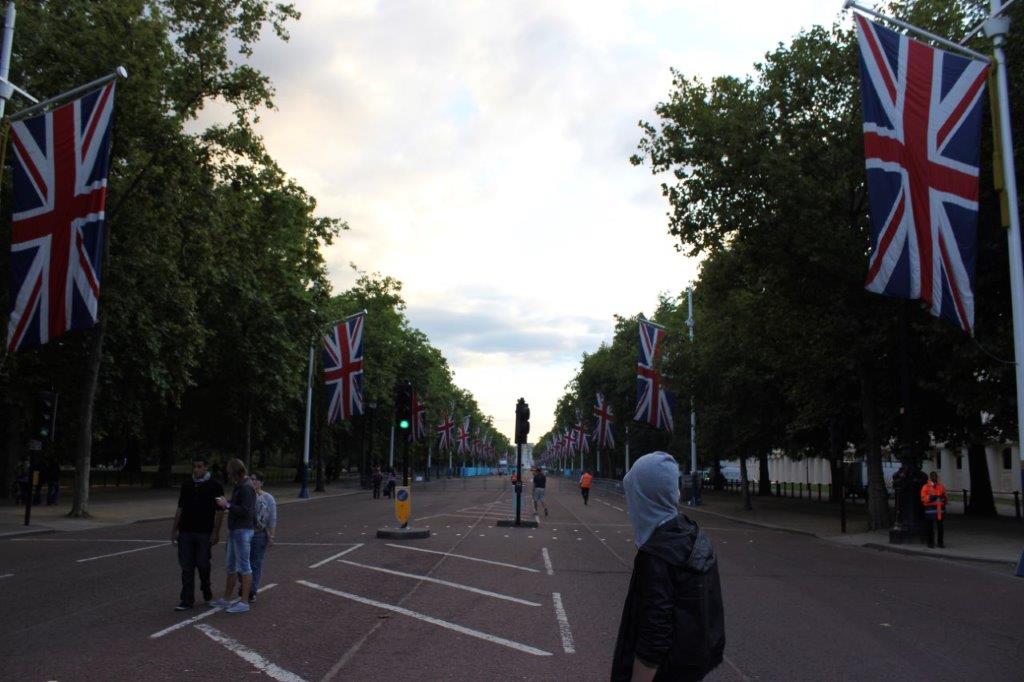 Turns out the UK is an interesting place

Wanting to learn about whichever land I find myself, I ask locals their opinions and thoughts on their country. “What are the best things about your country?” is a common one I like to ask. Asking others about their homeland invites questions about your own and when I first started having my questions mirrored back to me it triggered my own interest as their curiosity of my country rubbed off on me. Trying to explain life and aspects of the UK to someone who’d only seen it in films was like an exercise in expressing thoughts and feelings on things which I hadn’t really considered. Like most people I enjoy sharing information – we all know the nice feeling when someone asks you about something that you know a lot about – and I wanted to know more, not only to be able to answer other people’s questions but to know for myself. With new insight into how culture affects people, it also made me learn about myself and how I’ve been shaped by English culture.

These conversations with people of other nationalities changed the way I think about my own country in another way too – in its worldwide perception and reputation. Interestingly I found out that mention of England in the East commonly summons pictures of fish & chips, double-decker buses and red phone boxes. I also found it interesting that England is considered a very advanced and modern country, despite being way behind the East in many things like technology, transportation and rates of violent crime. 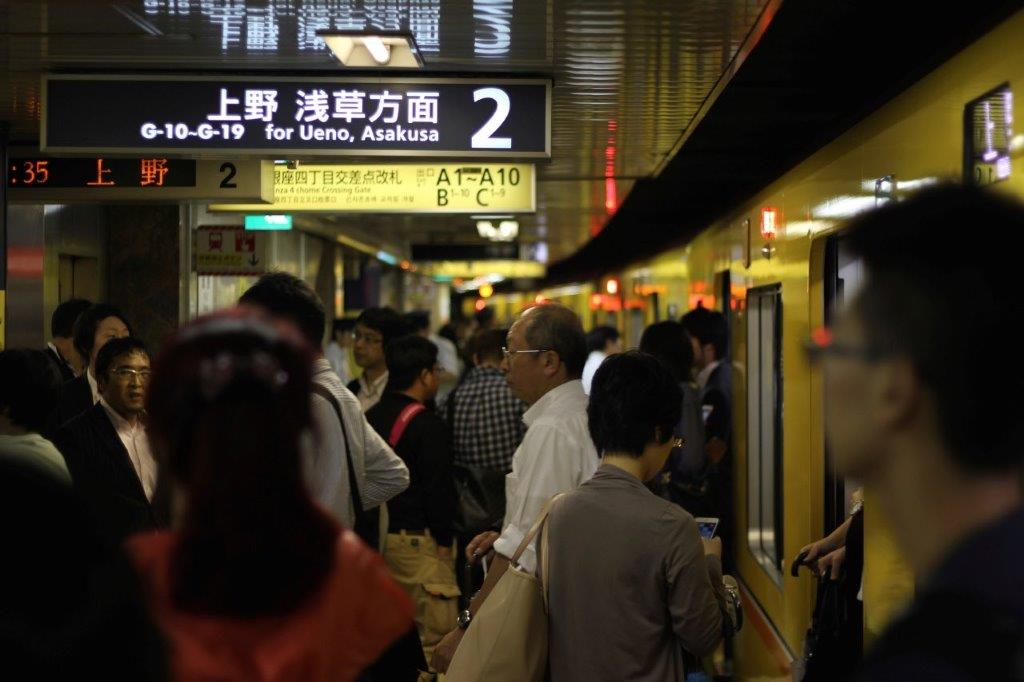 Metro in Tokyo – Japan is the future

I’m currently writing this as I travel Latin America, and during my 7 months in South America this year I’ve found that people here associate us with tea (of course), the old empire, the musical legacy of the 60s & 70s (I found that Pink Floyd, Led Zeppelin and our other greats are probably listened to more in the continent of South America than at home- I’ve lost count of the times people have told me ‘I love the music from your country’), and specifically in Argentina, the Falkland Islands and Maradona’s hand of god in ’86 – which is seen as a powerful and symbolic act of rebellion against the tyrannical empires of Europe. I previously had little idea about these international impressions and connections with of the piece of land on which I spent the first 23 years of my life.

Coming Home: Seeing With New Eyes & Appreciating the Culture That Made Me

When I left England it was the only culture I’d lived and been immersed in. I’d never been outside the country for more than a month and had never worked, studied, or lived anything like the ‘typical’ life of a citizen in any of the countries I’d visited. So when I arrived in China, everything was measured up against home – it was the only first hand reference point that I had. By the time I’d arrived in Korea, China had become another reference point. Everything new and novel about Korea was now also measured up against China. After Korea I visited Taiwan and then spent a month in Japan – and of course comparisons were then made to China and Korea. By the time I was heading back home I was thinking less about how places compared to England, but more about the finer differences between the different cultures of the far East. Because of these experiences I had new perspectives, and when I finally made it back to England it was a different country to the one that I’d left. 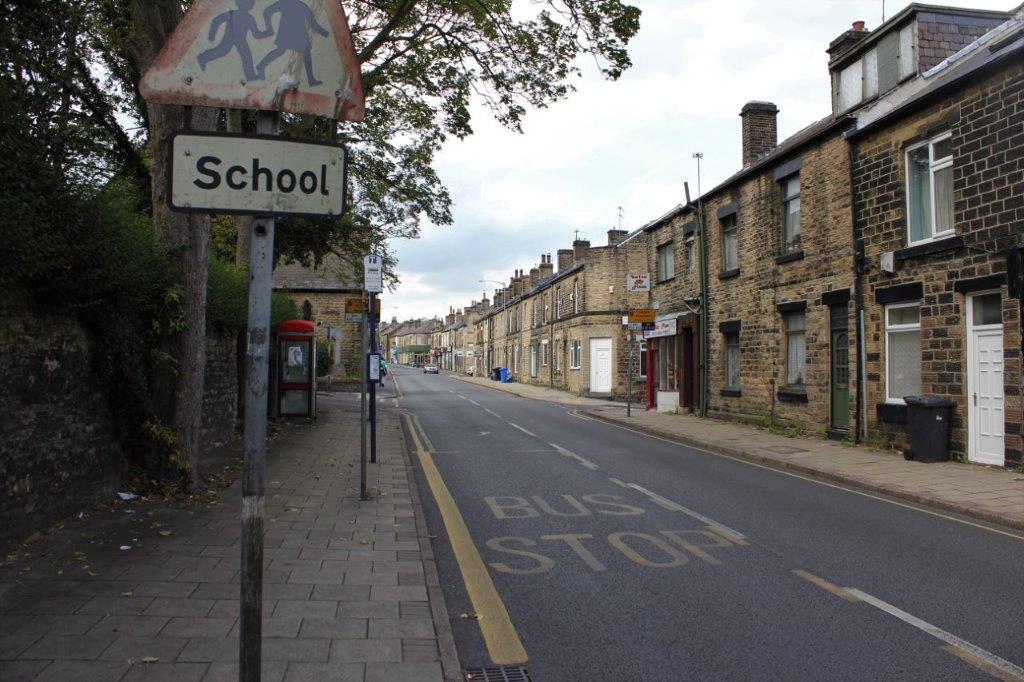 Typical street scene – not as typical on my return

You’ve probably heard the term ‘reverse-culture shock’, but I’m not referring to that, what I experienced didn’t induce any stress, only an enchantment with my country and culture. I saw things differently and noticed quirks in my home culture that I’d never thought twice of before. Far from becoming anti-patriotic, I became endeared with the culture that shaped me.

I remember going to a rugby game with my Dad over the Christmas holidays. Gloucester were playing, his hometown team. After a pub meal in the centre we walked through the crowds of fans filling the streets of the city surrounding the stadium. As we entered the songs started up. I’d been to countless rugby games in the past with my family but this time was different. The atmosphere bubbling as everyone was singing the two-tone refrain in the west-country farmery accent of ‘Glaaaawsteeeer, Glaaaaaawsteeer’. It struck me for the first time how quirky the experience of going to a local rugby match is. Looking through the crowd I saw all the peculiar characters you find there; the old-school fans with beers in hand to young kids in cherry and white scarves being initiated into the community. What used to be a simple enough activity for spending time with my Dad had become a fascinating cultural spectacle. After spending years where practically noone plays, watches, or talks about the sport, the novelty of hulking athletes throwing a ball around and smashing each other whilst cheering locals surrounded them was again a captivating spectacle. 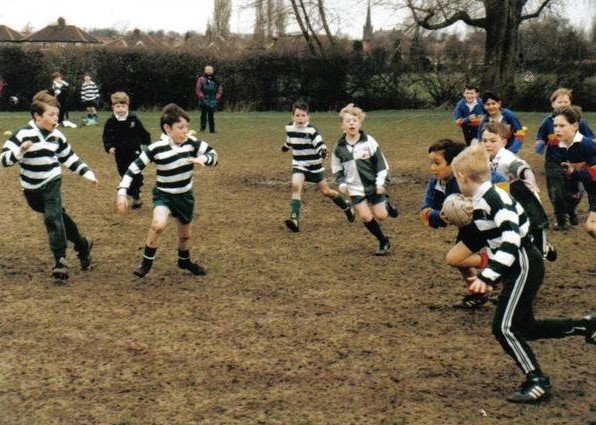 Now when on visits to see my friends and the favourite Earl Grey tea is served with milk and biscuits, it’s not just another cup of tea and a chance to sit down and catchup – it feels so charming and typically British.

And this happens all the time, I see the things we do and how we do them in a totally new light. It stretches to everything; art, politics, interaction, humour (yet to find somewhere that tops our humour, and is probably the thing I miss most when I go away!).

I never expected to learn about and reflect on my home culture so much when I decided to leave home, and I certainly never expected it to transform my boring old home town into a place of wonder. But what can I say? It did. As I write from Mexico a good few months from my next return home, I look forward to the cup of tea and Sunday roast that await me. If you’re on the fence about making a leap to live overseas because you’re worried you’ll miss things from home, I can’t promise that you won’t. But I can tell you that it’s an amazing journey of discovery that can change your experience of your homeland in a truly positive way. Nothing is quite like home, and I can tell you, it’ll never be the same again.

Bill Murray Talks Deeply On The Power Of Mindfulness