MDMA has long been known as a party drug but it’s effects have shown it to be an ideal tool for use in therapy. If you are planning a therapeutically oriented MDMA session and looking for a ready made playlist to use, this post contains links to two music playlists. 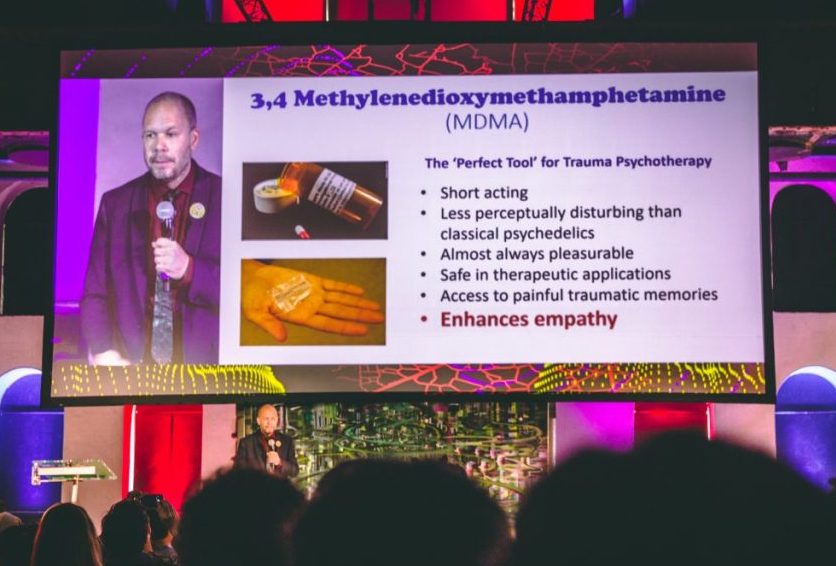 Ben Sessa, speaking at Beyond Psychedelics 2018, explaining why MDMA is such a useful tool for therapy

Similar to the psilocybin playlists, these have been designed to follow the arc of the drug’s effects. The music is more gentle at the beginning, then intensifies and becomes more evocative as the drug’s effects reach their peak. The music then winds down in sync with the drug, gently bringing the session to a close.

You will notice that these sessions are both over 5 hours, which is longer than the effects of a single dose of MDMA. That is because these playlists have been created to cover a session which includes a supplemental ‘booster’ dose. In most research studies, a full 125 mg dose of MDMA is taken at the start of the session, and then a booster dose of half that, 62.5 mg, is offered 1.5 to 2 hours later.

When I am doing an MDMA session, I will typically weigh out both the initial and booster dose before the start of the session. I make a note of the time of the first dose in my journey log, and set an alarm for 70 minutes later for the booster dose (I have personally found this to be the best timing for me). When the alarm goes off, I take a moment to check in with myself and make a decision on the booster. This timing extends the duration of the session by around an hour, without increasing the intensity. Due to the short length of MDMA’s effects, you might consider doing something similar.

Here is another one from Mendel Kaelen, who designed two psilocybin playlists for use at Imperial and now Usona. If you are especially interested in the role of music in psychedelic therapy and would like to learn more, I recommend keeping an eye on Mendel’s current project, Wavepaths, who are providing adaptive music for psychedelic therapy.

This playlist was originally created for MDMA-assisted psychotherapy studies at Bristol University, Imperial College London, and MAPS. It is a similar vibe to his psilocybin playlists, and even contains a few of the same tracks. I have not personally used it, as I generally prefer other styles of music with MDMA. However, a good friend of mine has and highly recommends. Also, knowing it’s from Mendel Kaelen, I’m sure it’s excellent.

Shannon Clare has been working in key roles in some of the most important modern day research involving MDMA. After graduating with a masters in Integral Counseling Psychology at CIIS, one of the leading institutes in psychedelic education today, she has worked a co-therapist in MAPS-sponsored clinical trials, researching MDMA-assisted psychotherapy for anxiety associated with life-threatening illness. She has also served as the therapist training program coordinator at MAPS.

This playlist has a somewhat similar vibe to other modern therapy playlists, using similar styles of music, such as neo-classical, ambient, but also some more indigenous type music, including drumming and more traditional instruments such as flutes.

Shannon also has collections of music for various stages of a session in playlists on her spotify profile, such as Active, Returning, Inner Exploration, and Joy Peace. These can be very helpful if you’d like to make your own playlists. You can find more information about what role the music will play on the top of each’s spotify page. For example, the Active playlist contains ‘music that energizes or activates, may be evocative or stimulating, possibly triggering’.

As a bonus, Shannon also has a playlist called MDMA Mountain Magical Movement, which looks like a very fun one 🙂

I wish you wonderful journeys!

Music is such an integral part to the setting of an experience, so finding a good playlist is an important part of preparing. If you have any other playlists, please get in contact, I am always on the hunt for more!

Best of luck in your sessions!

The Graeme Carl Scale: 5 Levels of a Psychedelic Experience

Learning How To Use Psychedelics
Scroll to top